The Burden of Responsibility 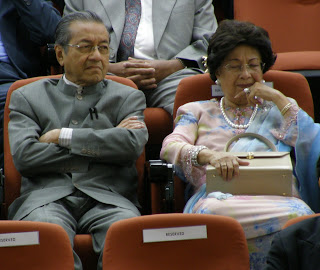 As the nation enters a New Age, in an epic turn of events that was the 14th General Election, many are quick to congratulate the 92-year old Tun Dr. Mahathir on his victory, and subsequently, on his appointment as the 7th Prime Minister.

Congratulations are of course due for the winning political parties and their supporters. But Tun Dr. Mahathir deserves much more. I believe when he rejoined the political arena a few years ago, after a brief retirement period, he never intended to become the Prime Minister again.

In fact - as evident by the tears of Tun Dr. Siti Hasmah on hearing the appointment of her husband as the PM candidate of the opposition parties before the recent election - leading the nation again in the ninth decade of life is no cause for celebration. It is a burden of responsibility - a gargantuan weight to carry on one's shoulders.

But at this period, shameful as it is to admit, there seems to be no one else equally capable to carry out the duties of Malaysia's 7th PM. This time is different, because the 7th PM carries the hopes of many who (were dissatisfied and mostly distrustful of the government, but with the fall of the party who ruled for over 60 years) dream of a better nation - of high income, championing freedom, peace, and rid of corruption.

So let us not just congratulate Tun on his success in leading the opposition parties to win the election in unison. We must show Tun our heartfelt gratitude, by proving ourselves worthy of better living conditions - honouring our own duties and responsibilities, as enlightened citizens of this blessed country we call home.